The work of Béatrice can be compared with that on flamenco several decades ago: how to breathe life back into a universe of dance which has been forgotten and misinterpreted, how to preserve the quintessential nature of ancestral dances whilst infusing them with a rich and refined modernity at the same time.

And how to transform the “theatrical dance of Egypt” into a genuine performing art. 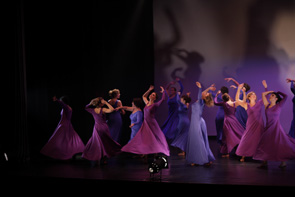 The archaeology of dancing

Through dynamic and innovative work, Béatrice lets ancient Egyptian dances and musics emerge from the past. She virtually makes them talk, interprets them, redefines their outline in order to magnify them and make them evolve towards a modern approach, yet preserving their essential characteristics. Using the stage as a theatre, she revives Egyptian dances and secures their future development. Béatrice does not only "dance" Egypt but brings it back to life and tells its story. 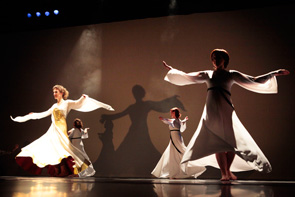 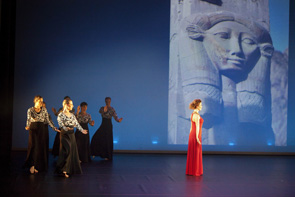 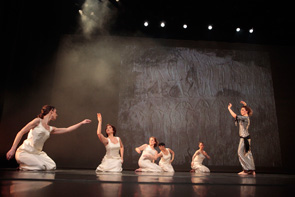 During her frequent trips to Egypt, Béatrice meets Egyptian artists (singers, musicians, dancers, tradition keepers), travelling to many towns and villages in search of traditional music and movements, of these rare and precious testimonies of an oral tradition, which are sometimes vulnerable. 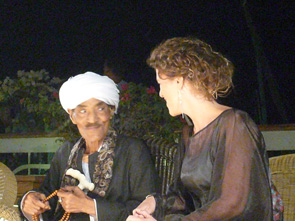 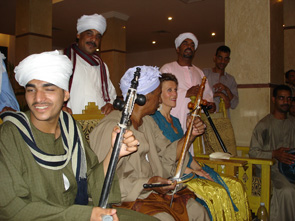 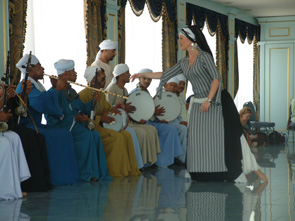 A collaboration with outstanding Egyptian musicians

Through continual research and a long collaboration with outstanding Egyptian ensembles such as the Musicians of the Nile and the Sufi troupe Al Tuni but also classical musicians of the Cairo Opera, Béatrice develops a powerful artistic language, based on refined and complex body movements, combining technical virtuosity and pure movement, in order to interpret the music in a subtle way. 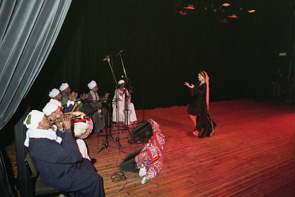 In order to nurture the Tarab universe, Béatrice develops:

- the theatrical form of Egyptian dances, their emotional facets, their ability to tell a story about the people, about Egypt, their dignity, this exceptional link to Time, with their roots in a deeply complex society.

- the ability to constantly improvise, this being unique to the music and the traditional dances of Egypt. Nothing is set in stone: dancers and musicians are continuously searching for sounds, movements and varying emotions.

- the search for choreography, technique and beauty to enhance the original essence of the dance. This is certainly essential, crucial even, but at one point limiting. The development of movement is of great importance: after having identified some basic traditional movements, these need to be perfected and developed.

- the costumes, the shape and cut of which are handed down by tradition. Experimenting with materials and colours and seeking a certain refinement help developing a “technical dance”.

Besides its artistic contribution Tarab attemps to consider other aspects of dancing:

I An original undertaking

The word "creation" really means what it says when you think of the originality of presenting an artistic discipline that is so distant as regards its origins yet so near as regards its modern-day richness. Theatrical dance of Egypt is anything but experimental. It already has a worldwide reputation. The two indispensable foundations of this discipline are high-quality performances and teaching (by the Tarab school, established in Brussels) and the coming together of pupils of all nationalities. In encouraging original undertakings, cultural organisations cannot afford to miss this East-West rendez-vous.

II The meeting of East and West

In a multicultural and multidisciplinary age, theatrical dance of Egypt is the perfect expression of the blending of rhythms, melodies and movements from a familiar and yet undiscovered culture. Egypt is a country which, beyond legends, demands respect. A country many times invaded since ancient times, Egypt has, despite this background of oppression, been able to integrate foreign influences without betraying its own traditions. Indeed, in the artistic field (dance, music, song, cinema) Egypt is even today a reference for the whole Arab world. Béatrice pays an enthusiastic homage to this rich culture.

Theatrical dance of Egypt also emphasizes femininity. It reveals women's true beauty, a million miles away from the stereotyped pictures of their bodies. Showing this on stage is a kind of counter-balance to the androgynous character of some contemporary creations. It allows those women who practise these dances (both professionals and amateurs) to express their sensitivity. Letting go, sensuality and spirituality, exuberance and modesty - Egyptian theatrical dance is all about flaming femininity and is a quest for pure beauty.

A physical activity for all ages. This artistic form of dancing is a blend of physical exercise and aesthetics. One might see it as an artistic sport for the young and as a sport preserving the body for the not-so-young. It can be a form of preventive or rehabilitative therapy.
Theatrical dance of Egypt encourages basic, natural movements. Movements which do not harm our joints and which help shaping and animating our body. Many of these movements are spiral in form, as found in some martial arts, but done to music.

Rural or urban, stemming from the people or from the royal court, theatrical dance of Egypt crosses social barriers. Its human nature gives it universal appeal; it knows no elitism and its presentation makes it accessible to newcomers and a large public - a perfect example of openness and tolerance.

Euro-Mediterranean relations are ever-increasing. Art too can make a giant leap and build bridges between different parts of what the enlightened are now calling the Mediterranean cultural community.